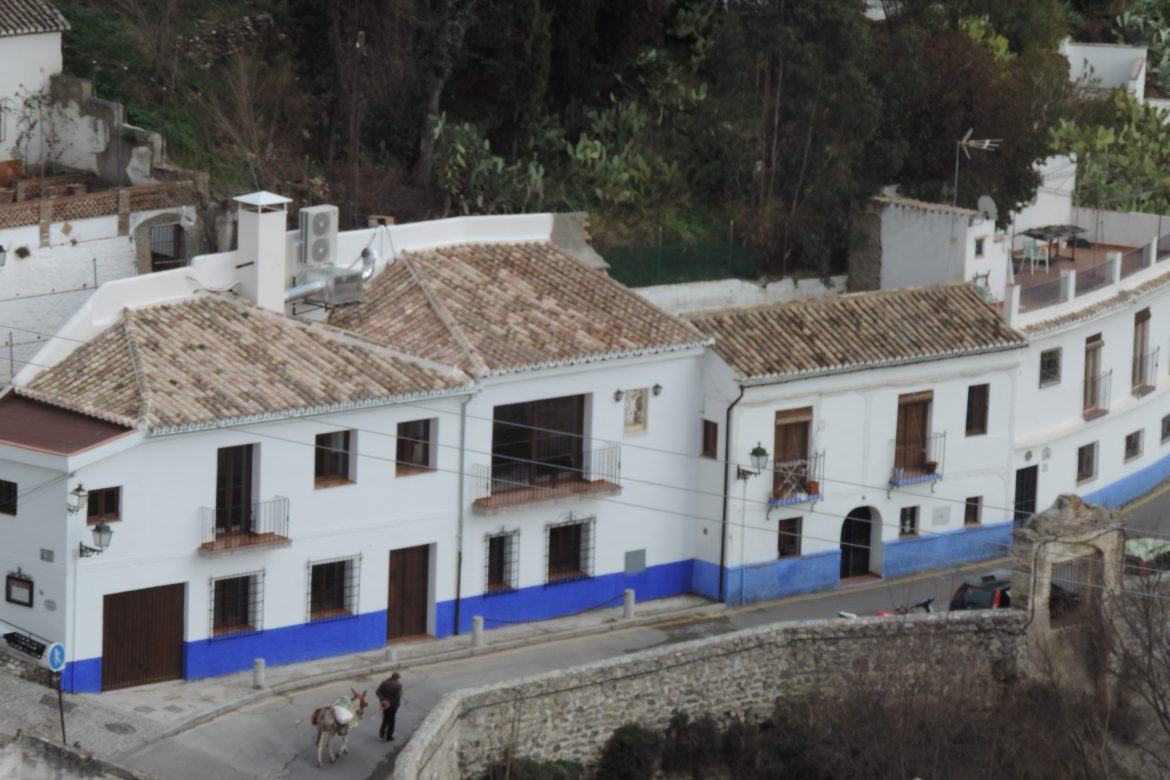 Hello everyone! How are you since or last visit, not too tired I hope? Better not! Today we are gonna climb! Follow me (and Walk In Granada) to the Sacromonte, up in Granada, for this famous neighbourhood with a fantastic view point and whites caves…. Let’s do this!

You will have the time to rest while we climb, we will stop from time to time as the slopes are pretty steep. Take your time the admire the view… Or the pictures. Before I forget, do you see this wall? The holes inside? It is typical from the neighbourhood of the Albaycin and the Sacromonte. It helps the walls to breathe. You read it! The walls are made with a mix of clay. The inhabitants found a way to keep the walls from collapsing by dig little holes into them. This way, we can drain the water and the dampness out. By the way, if you are in Granada when it’s raining, just touch them with your fingers and you will feel it!

Do you like treasure hunts? That’s great! Here, you can search and read urban legends and little stories about the families that used to live in these houses. For example, La Casa El Bombo : It is said that in this house that many neighbours shared, women were pregnant at the same time… If you love spicy stories, take the time to lose yourself in the neighbourhood, you will find lots of similar storties, written on white and blue ceramics, next to the doors of these houses.

And what you see there… Are also houses ! They are caves !

We are now at the real point of departure of the Sacromonte. And the statue you see there, is an important character of the city. You have before your eyes, El Churrojumo, the first tour guide of Granada! Well, if we can call him like that. His name was Mariano Fernandez Santiago and his full nickname was in reality “El Churro de Humo” (literally, “path of smoke”, expression used when someone leaves a place.) If you say it quick, the Andalusian way, you come with “churrojumo”. He was a “gipsy” (gitanos and gypsies are a different thing) leaving in the caves, he was quite proud I would say. He went to see the artists creating in the Alhambra and posed for their paintings. After that… he sold them! He created a kind of touristic path in the Sacromonte. And now, he has his own statue!

The cactus you see now, directly taken from a Western movie, are indeed the best friends of the inhabitants of the Sacromonte. They were used to delimit the roofs of the caves, so nobody could step onto one and make the house collapse. But they were also used as food! It is said they are really yummy in a soup. You can also find there Aloe Vera, famous for its properties for our skin.

We will stop a bit, so the lovers can rest… It is known that this fountain was created for lovers. The inscription says: “Cuanto gustaria ser la fuente de mi barrio pa cuanto pases y bebas sentir muy cerca tus labios”; what we can translate roughly by “I wish I were the fountain of my neighbourhood; so I could feel your lips when you come and drink its water.” If you drink it, the water can also bring you luck. Feeling thirsty yet?

Look at these mountains. Follow their lines…If the inhabitants of the caves of the Sacromonte don’t have tap water, the Alhambra needed to, so did the Generalife! 7 km away, in those mountains, you could find the “water tower”, that took the water from the rivers of Granada to supply the arab palace. It was forbidden to people to live nearby, and to take the water. This is way this part of the valley seems so empty.

In the 40s-50s, tourism in the neighbourhood intensified, but it was in the 90s that it almost became unbearable: people fought themselves for those caves ! Originally, the “undesired” inhabitants were pushed away from the city, in those caves. They used to belong to gypsies, travelling people, people from Africa. They don’t have any legal or illegal status. They are not living in the city so they don’t pay tax but they don’t have all the living comforts: officially, they don’t have tap water, nor electricity but inhabitants are really self-reliant, you can find aerials or photovoltaic panels on the “roofs”…

Here is unfortunately a cave that collapsed three years ago… Before, people used to build caves by digging deeply. First the kitchen, then the living room and then, far away from the entrance, the bedroom with 15-25° Celsius, which is very nice during summer! Of course, the deep digging is dangerous and everything tend to collapse soon or later. Today, caves are not that deep anymore, only one or two rooms. But they are “wider” with sometimes different entrances.

When a cave collapse and/or that his inhabitants leave, the rule is “first come, first served” to use the materials and tools remaining to create an other….

And we finish with the mirador of the San Miguel Alto church, the highest church of Granada. Beautiful, isn’t it? It is a very crowded place on weekends but you can make pleasant encounters. For example, Philippe, or Phil de Soie (pun with Phil or “Philippe”, fil “threads” and soie “silk” to make silk threads) a Belgian painter that doesn’t sell his work for a long time… He gives it! You can ask from printing of his paintings and he will be pleased to offer them. Then, you are free to give what you want, a bit of money, a smile, a kiss, a drink… I took a beautiful panorama and a print of one of the Alhambra doors. All those coulours! 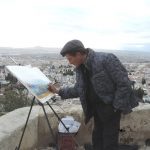 It is already the end of our visit… Already yes! Are you tired by the climbing? If yes, don’t worry you will have time to rest until next week for our visit of the Albaycin. What do you think?

Where to eat in Granada?

To me, it’s the best pizzería in Granada. Okay, it’s not fair because I didn’t try that many pizzerias. But this one is enough for me! In the centre, very cheap, very good, you can order in the restaurant or to go and you have plenty of choices. It is not vegan but you can ask to remove the cheese on vegetarian pizza. This is a very famous pizzeria in Granada, I recommend you come early if you want to have a seat. But they are also open very late, until midnight…as every other bar in the city. Bonus point: you can ask a METER of pizza (okay, it is in the name of the company) or half a meter; and choose how many different pizza you want in one. You can also ask for a doggy bag to go. Paradise.

You can find my other good plans and where to eat in Granada here.